A soldier of 3 RIFLES has been talking about his decision to pick up a live Taleban hand grenade and throw it back in an attempt to save himself and his comrades.

Rifleman James McKie from Recce Platoon, 3rd Battalion The Rifles was under fire from three directions when the hand grenade hit his Platoon commander and landed at his feet. 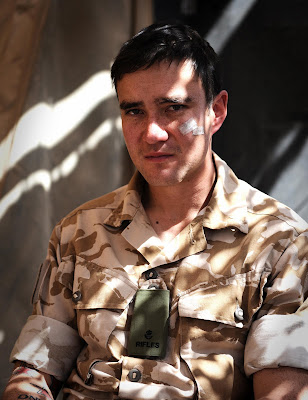 “My first thought was I hope this doesn’t hurt too much” he said. “That, and I’ve really only got one chance to do this. If it fails, either way, doing nothing, I’m going to get the same amount of hurt. So I picked it up and threw it off the roof”.
The actions of Rifleman McKie helped to save the lives of his Commander and one other soldier who were engaging the enemy in a fire fight, from a compound roof, in the Sangin area of Helmand Province.

“The fire was disciplined and accurate. I managed to spot one of the firing points and I engaged with my GPMG to suppress the enemy. After a few minutes they stopped firing and we continued observing to the east. It must have been no more than five minutes and then I heard what sounded like a mini flare come from our right where I knew there were none of our guys, so I thought this was really unusual. It was actually the fly-off lever of a grenade that had been thrown from the alleyway below”.

Rifleman McKie sustained fragmentation injuries to his right arm and face as the grenade exploded mid air, close to where he stood. 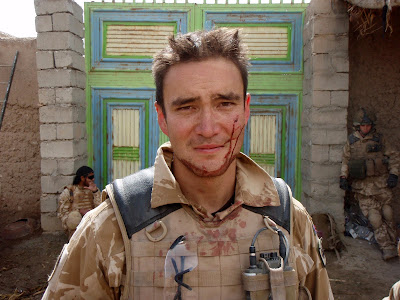 Fragmentation also hit his Platoon Commander Captain Graeme Kerr who sustained injuries to his leg and who is recovering at Selly Oak Hospital in the UK.

“We were in a high position on a compound roof. There was no way you could throw yourself off and not get injured, so I made a decision to pick up the grenade and throw it off the roof. And I threw it quite deliberately. I tried to throw it properly, to clear the roof. I didn’t want to do it half arsed and have them throw it back at us or anything like that. I remember thinking that if I didn’t pull this off, it was going to hurt. But at that stage I was pretty much committed.

“My platoon has taken a lot of casualties. I really didn’t want to see anyone else get hurt. So I committed to that course of action. It was dropping down into the alleyway before it detonated. As I continued to watch it, as you are trained to, I received fragmentation in my face and right arm. Because of the way Captain Kerr was positioned, he got a larger piece of fragmentation in his left leg, but otherwise no-one else was seriously hurt”.

Rifleman McKie then threw smoke to cover their withdrawal and with Captain Kerr and his section, withdrew, firing and manoeuvring until they reached the safety of another compound. Captain Kerr was immediately evacuated by helicopter, but Rifleman McKie was able to continue in his duties until the following day when he was evacuated to Bastion, despite his protests to stay.

“In retrospect, people keep telling me how brave I am, which I’m slightly embarrassed about. I’d like to think that anyone in that situation would have done the same or something similar because you can’t just sit there and let yourself or other people get hurt. I don’t feel particularly brave. I thought: I have to do this to survive. Not just for myself but for the guys around me as well. I’m not expecting anything from them, I don’t want any thanks from them, I just don’t want them to get hurt.

Rifleman McKie recently joined the British Army, having previously served in the New Zealand Army. “I love soldiering”, he said. “I love being here in Afghanistan. Obviously bad things happen and I can’t go back and change it, but what I can do is try and stop things happening around me. As far as the military experience goes, this is the ultimate for a career soldier. I understand there are a lot of people out here who don’t like it, who can’t wait to get home, that’s their opinion and I have to respect that, but this is what I want to do”.
Posted by Media Ops Blog at 10:55 PM